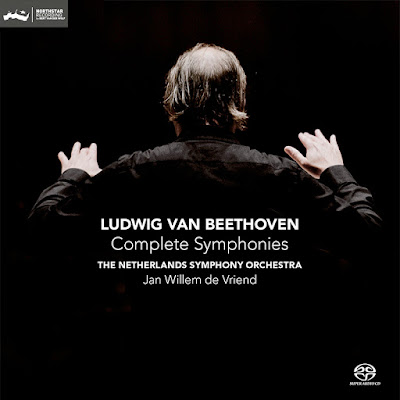 I wrote a while back about how the Mahler Symphony Cycle has more or less replaced the Beethoven Cycle as the reference standard against which modern conductors and orchestras seek to measure themselves.  One of the problems is that there is almost a saturation in the Beethoven repertoire. It's been done so many times that there is less and less room for someone to make a new statement, or showcase a personal approach. Another issue may be that Beethoven’s canvas can be considered more limited and more limiting than Mahler’s, although that is an argument that tends to find more traction outside of professional music circles than within.


On the other hand, Beethoven’s relatively more rigid and formalized approach can be used to great advantage to emphasize subtle points of interpretation, particularly in the context of a complete cycle, in much the same way that a Black & White photograph often opens a window to a greater appreciation of composition and character than its colour counterpart.  There is also the practical issue that it is possible, if one is of a mind to do so, to audition a 5-hour Beethoven cycle over the course of a leisurely afternoon, something that would be out of the question with a 13-hour Mahler cycle.

These days, for a conductor embarking upon a new recording of the Beethoven cycle, the vast legacy of Beethoven Symphony recordings that are already out there must surely loom dauntingly.  I recall reading one reviewer’s assertion that there are over 400 complete symphony cycles alone, something I find astonishing.   So, whatever your vision might be, there is a pretty good chance that somebody, somewhere, sometime, has already done something similar. Then there are the great reference cycles to be considered - what can possibly be constructively added to what the likes of Karajan, Toscanini, Klemperer, Bohm, and so forth, have already laid down?

Over the last three or four decades we have also been treated to the HIP (“Historically Informed Performance”) movement, which seeks to pay homage to the fact that musical instruments in Beethoven’s time were constructed differently, and hence sounded different, compared to contemporary practice.   It, in effect, poses the question “What would these pieces have sounded like at the time they were originally created?”, the unspoken subtext being that whatever it was should most accurately reflect the composer’s intentions.  It is a very valid question from an academic perspective, and makes for a fiery philosophical discussion.

In any case, none of this seems to have put any sort of brake on the continuing output of recorded Beethoven cycles, which continue to emerge.   And it should be noted that some of them have been very highly praised.  Harnoncourt, Chailly, Jansons, and Krivine have all produced well-received cycles during the last decade although I haven’t actually heard them all (or, in the case of Krivine, even heard of him!).  The cycle I am going to report on here is from another conductor who, until I happened upon this cycle, also occupied a place on my ‘never-heard-of-him’ list.  Jan Willem de Vriend.  Do we call him “de Vriend” or just “Vriend”?  I don’t know, but either way I’m already getting pretty fed up with the way my spell-checker keeps changing him to “Friend”, so apologies in advance if any of those escape my final proof-reading.  Here, Vriend conducts The Netherlands Symphony Orchestra.

Carlos Kleiber’s 1975 recording of symphonies 5 and 7 with the Vienna Philharmonic stands out - and in my view stands head and shoulders above all others - as a landmark interpretation.  In many ways, it established a new school of thought regarding Beethoven interpretation, but it would take more space than I have here to do that notion justice.  Where, for example, Karajan’s superb 1962 cycle emphasizes phrasing, tonality, and an earnest sense of reverence, Kleiber’s 5th has a lighter, smiling face, and opens our eyes (ears?) to the importance of the tight rhythmic elements of the composition, something with which modern jazz musicians would feel an immediate kinship.  Vriend’s new Beethoven cycle is very much of the Kleiber school, which, I suppose, is one reason I like it so much, since Kleiber, being possessed of a famously difficult personality, did not go on to record a complete cycle.

“Precision” is the first world that comes to mind when listening to the de Vriend cycle.  It's what in Rock Music circles we refer to as tight.  And Vriend would, surely, have been a drummer.  Every phrase and passage, every instrument, is carefully delineated, so that we get to hear deeply into the music.  The phrasing is light and airy, but tightly controlled.  Tempi give the impression of being on the brisk side, but a stopwatch shows this to be mostly illusory.  Above all else, there is a cohesion of purpose across the entire cycle, accomplished to a degree I have never previously heard.  Listening through the entire cycle in one sitting, as I have done several times, each symphony flows naturally into the next, like movements within a single vast work.  What comes across is a combination of conductor and orchestra very much on the same page - the one is very clearly buying quite enthusiastically what the other is selling.

Perhaps Vriend’s most remarkable accomplishment is the way he transforms Symphony No 1 from being a 'baby brother' symphony to fully formed mature work.  Once the slightly plodding introduction gives way, it really makes you sit up and take notice.  It is the closest thing you will ever come to hearing a previously undiscovered Beethoven symphony for the first time.  Has de Vriend played fast and loose with the orchestration?  There is a richness of tone and sureness of touch to the development that I haven’t previously associated with the Haydn-esque Symphonies 1 and 2.  I certainly didn’t detect any evidence of such liberties being taken with any of the other symphonies that I know much better.  Either way, as the closing bars of Symphony No 1 bray triumphantly out, your attention will surely have been captured, and you will probably find yourself staying in your listening chair as No 1 gives way to No 2, No 3, and so on.  I've lost count of the number of occasions in this cycle where, as a particular movement closes, I just want to do a fist-pump and shout "Yes!".

The famous 9th symphony was the first of the cycle that I actually heard, and it prompted me to get the rest of the cycle.  ‘Idiosyncratic’ was the word I wrote on my notepad.  It too had me sitting up from note one, although first time through it was more ‘interesting’ than gripping.  However, it served it purpose, and left me wanting to listen through again, having notched my expectations up accordingly.  The 800lb gorilla in the 9th symphony is the choice of tempi with which to conclude the final 30 seconds of the last movement.  It is quite possibly classical music’s finest and most satisfying climax.  My problem is that, for me at any rate, Karajan’s 1962 performance rules the roost, and any departure from his inspiring rendition just sounds jarring to me.  And de Vriend’s version DOES depart.  Not in a good way.  No fist-pump.  Big let-down.

Like I said, more than anything else, what de Vriend has accomplished here is the most coherent Beethoven cycle I have yet heard.  It is not perfect, though. While his performance of the 1st Symphony may conceivably be the finest on record, none of the other symphonies will likely make anybody’s personal ‘best of’ list.  But this whole coherence thing is not to be under-rated.  It has a magnetic personality of its own.  More than with any other symphony cycle I own, listening to any one of these symphonies makes we want to listen to another, and another, and another.  As a cycle, I have always had a soft spot for Karajan's 1962 go-round, but playing it now, I find myself hearing it as a curation of nine separate symphonies, rather than as a collective statement. What Jan Willem de Vriend has accomplished with this cycle deserves great credit.  My feeling is that, as it continues to grow on me as a cycle - and it really does continue to grow on me - it will establish itself considerably in stature.  I just wish the ninth didn’t wrap up so disappointingly!

One last thing to be said about this cycle.  It was recorded by Northstar Recording in Holland.  This group is making what are quite possibly the finest classical recordings in the world today.  Given that the quality of classical music recording in general is today at an extraordinarily high level across the board, these could quite possibly be the finest classical recordings ever.  Take advantage while you get the chance.  Here I listened in DSD64.  I also have some of their other recordings in their native DXD (24-bit 352.8kHz PCM) format. [What with Channel Classics also being Dutch, there must be something in the dunes and dykes over there.]   It is SUCH a bonus when great music and great recordings come together.

Posted by Richard @ BitPerfect at 5:56 pm