I have very recently been introduced to the American composer Mason Bates, and in particular an album of three of his symphonic works recently released by the San Francisco Symphony.  Indeed, the first of these - “The B-Sides” - was commissioned by conductor Michael Tilson Thomas on behalf of SFS, the commission reportedly being proposed by Tilson Thomas during the intermission of a performance of Tchaikovsky and Brahms symphonies.  The album is called “Mason Bates - Works For Orchestra”, and I highly recommend it.

Mason’s music is possessed of the uneasy sonorities of a movie soundtrack set in the isolation of deep space.  It is both unsettling and captivating at the same time.  At various times it evokes ‘Alien’, ‘2001 - A Space Odyssey’, and ‘Close Encounters Of The Third Kind’.  But a sense of brooding foreboding seems to infuse everything.  Even as it breaks into the gusto and swing of big band jazz, this is quickly interrupted by ominous rumblings of thunder, or howling winds which transform into weirdly gurgling water.  The third movement of “The B-Sides” is some sort of eerie communication between astronauts and ground control, and we feel nervously concerned that the fates can have nothing good lined up for Major Tom.  It’s strangely strange, yet oddly normal.

Is this classical music or something else?  There are times when it is purely orchestral - and fits into the classical mould in both form and structure.  There are other times when only electronic sounds are present, or purely modern ensembles such as big band jazz.  We tend as music consumers to want to categorize our music into neat groups.  Sure, there is crossover music which melds disparate forms, but generally such works adhere to a consistent affectation throughout the piece.  Mason Bates is different.  Taking his inspiration from the way a movie soundtrack is put together he moves seamlessly from one soundscape to another in a style which comes across as remarkably organic and natural.  Still, it fits better in the ‘classical’ box than in any other.

For a conductor who can do Mahler with the very best of them, Michael Tilson Thomas does display a keen sensitivity to the Mason Bates idiom, but overall has a tendency to hold the music back too much.  This music carries an ambiguous yet overt emotional payload.  Tilson Thomas allows the tension to build very well, but doesn’t provide an appropriate release.  The net result is akin to reading a gripping novel, and finding that some swine has torn out the last chapter.

Naturally, for music inspired by the modern idiom, rhythm is a powerful element, and needs to be treated appropriately, unlike with Beethoven, say, where a heavy hand on the rhythmic aspects can overshadow the textural and structural subtleties.  The syncopated rhythms - indeed the overall phrasing - of Bates need to be played in such a way as to emphasize the ‘groove’.  Listen to the second movement “Chicago (2012)” of the ‘Alternative Energy’ symphony, and compare Tilson Thomas’s reading of it to Bernstein’s legendary 1958 performance of Stravinsky’s Rite of Spring.  Now I’m not suggesting that one should expect Tilson Thomas’s Bates to be “legendary”, but it does illustrate very cleanly the areas in which his Bates is wanting.

It is interesting to compare Tilson Thomas’s effort on ‘Works For Orchestra’ with Gil Rose’s interpretation of Bates’ ‘Mothership’ with the Boston Modern Orchestra Project.  This conductor/orchestra pair is more attuned to the contemporary music idiom, and thus the performance is more organic.  But the BMOP does not possess the depth of sonority of the finest orchestras, and as a result the film-score nature of the music is more to the fore, and any more profound emotional message is less apparent.  I expect that I will return to that album less frequently than I will the Tilson Thomas.

While my comments come across as overly critical, let me be clear.  I find “Works For Orchestra” to be deeply compelling.  The recording is crystal clear, the music is brilliantly conceived and finely played, and - for what it’s worth - the cover art is seriously cool!  Bates’ music shows genuinely original compositional skills without appearing to resort to modern artifice for its own sake.  Despite the new electronic sounds his basic orchestration is competent - bordering on the extremely good, actually - but is neither novel nor experimental.  Which is not a bad thing - I rather like it.  “Works For Orchestra” was, naturally, playing while I wrote this.  After the album finished, the next track which popped up randomly up on my playlist was Pohjola’s Daughter by Sibelius.  The transition was remarkably seamless, which I thought was very interesting.

You can download “Mason Bates - Works For Orchestra” in resolutions up to 24/192 from ProStudioMasters.com and others. 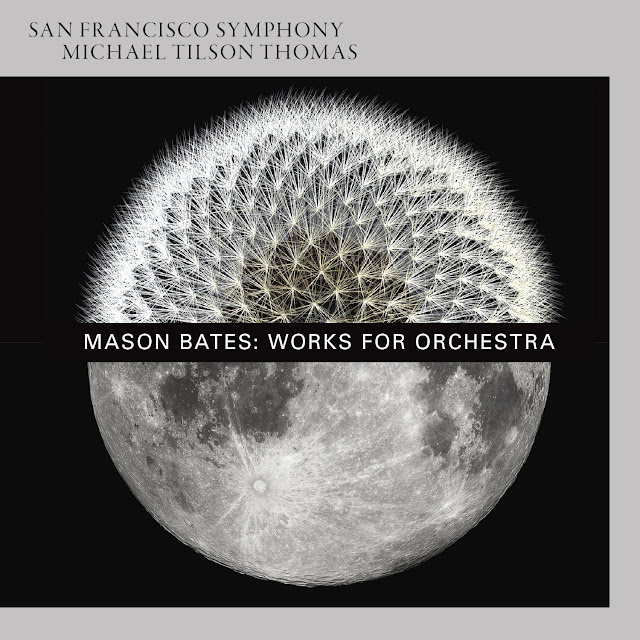 Posted by Richard @ BitPerfect at 7:43 pm